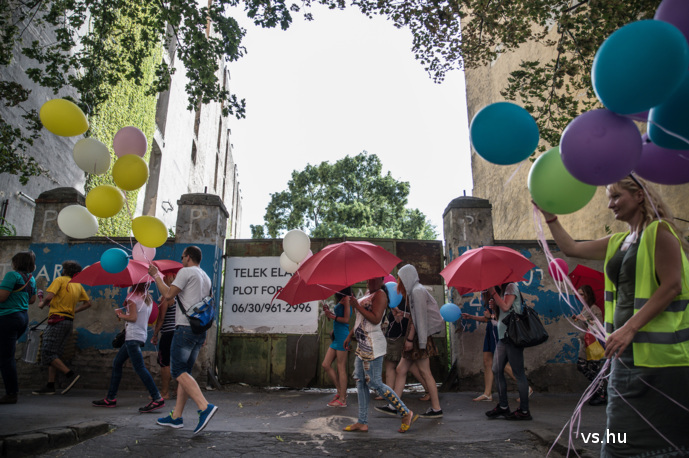 The main goal of the event was to remind the local government of the 8th district of Budapest that is the main contributor to the law on tolerance zones for sex workers, as well as to remind the general public that although the local governments are required by the law to designate tolerance zones in their areas, they omit to do so, therefore thousands of sex workers are left in a legally vulnerable position.

The main goal of the event was to remind the local government of the 8th district of Budapest that is the main contributor to the law on tolerance zones for sex workers, as well as to remind the general public that although the local governments are required by the law to designate tolerance zones in their areas, they omit to do so, therefore thousands of sex workers are left in a legally vulnerable position.

The celebration started with a march, followed by a press-conference and finished with the cakes and champagne. The march was held in the 8th district of Budapest, as this was a place with one of the biggest concentration of sex workers in the past. Nowadays it is one of the poor and segregated districts of Budapest with a big population of Roma and migrants, infamous for its ‘ghetto’ past.

The march started around 2 pm in front of the district’s local government’s building and went through several streets to ‘Aurora’, the place where a press-conference was held. There were about 30 participants: SZEXE members, representatives of SWAN Secretariat, Amnesty International, HCLU, media. The people were holding balloons and red umbrellas. The birthday mood was also created by samba drumming performed by an activist group Rhythms of Resistance that supports among others the cause of sex workers human rights. SZEXE also invited several professional dancers to the march, who (females only) were accused by the police for public indecency for the way they were dressed. Female dancers’ personal data were recorded on the spot, and police will decide if they initiate a legal proceeding. This happened for the first time on SZEXE’s public event. 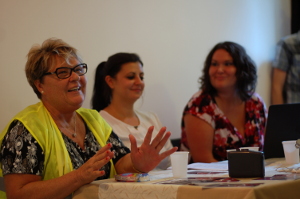 After everyone arrived to Aurora, the press-conference started. Ágnes, Bogi and Klaudia from SZEXE were first talking about sex workers in Hungary and SZEXE, and then they were answering the questions from the audience.

Firstly, they were talking about the problems with the tolerance zones. Although the law prescribes that the local governments of the region with population over 50.000 inhabitants is obliged by the law to assign such zones, but if they fail to do so, nothing happens to them in practice. Often local governments are reluctant to assign any zones, or they find zones in such places where sex workers cannot work at all (e.g., too far from a road, nobody ever goes there).

Then they were talking about huge fines and punishment of sex workers for breach of order if they perform their work outside of tolerance zones, e.g. These are only sex workers who get heavily fined, and if a sex worker has no money, she/he has to go to prison for 1 year if the total sum of the fine is around 4.000 Euro.

Then Klaudia, the lawyer of SZEXE was talking about the help the organization provides to the sex workers. Usually, this is the help the sex workers ask themselves for. This can be not only help with issues arising due to the accusation of public order disturbance, but also family and accommodation rights, or help with schooling for their children. She also added that a lot of sex workers are afraid to ask authorities for the help due to discrimination.

Bogi continued and she talked about morality and stigma around sex work that exist in the society. She said that usually sex workers’ problems are viewed from the ivory tower. She was also mentioned that apart from external stigma there is structural violence against sex workers generated by laws. Even though sex work is legal in Hungary if performed in an own apartment or in tolerance zones, street sex workers are usually discriminated and stigmatized based on the legislation on littering and traffic that are used to fine them. 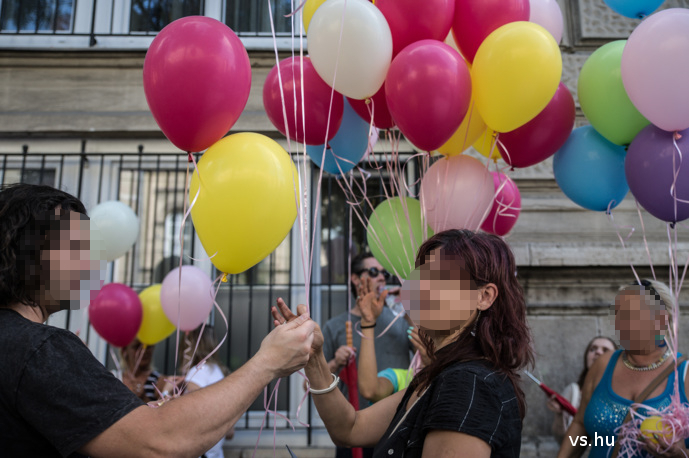 According to Bogi, sex work legalization does not really work in Hungary, as it is very hard for majority of sex workers to correspond to all the criteria. The legalization is working only for those ones who can afford working from their own flat and have all the health certificated available and updated on a regular basis.

The next point of Bogi was that sex workers problems are not their problems only, but the problems of the society. Also as the majority of sex workers are women, they face the same discrimination as women in general in Hungary, as the Hungarian society is quite conservative and patriarchal when it comes to the position of a woman in society. A lot of women do sex work in order to feed their kids and family. Therefore, sex workers rights are women’s rights.

For sex workers who are female, and/or Roma, and/or homeless, it is even harder as they have to face double or triple discrimination. 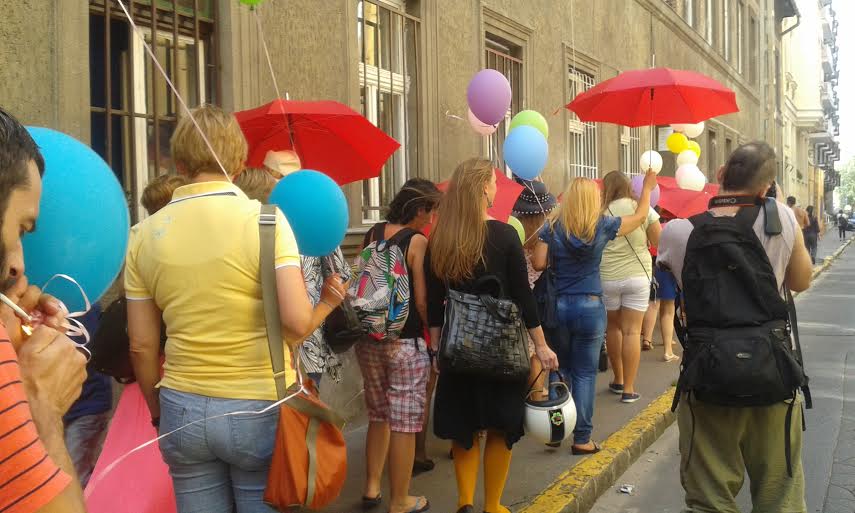 Furhtermore, according to Bogi, sex workers rights are also migrant rights. The topic of migration is very acute nowadays in Europe and particularly in Hungary. The number of migrant sex workers in Eastern and Central Europe is high, and the situation is especially hard for non-EU sex workers. At the same time, a lot of Hungarian sex workers go to work in Western Europe.

She also stressed that those who speak out for any aspect of criminalization of sex work ignore the voices of migrant sex workers and contribute to racist, anti-migrant sentiments as migrants often use sex work as their only livelihood option. In the name of anti-trafficking measures they are often subjected to police raids, arrests and deportation.

Bogi finished her speech with the message that since a lot of sex workers are women, single mothers, LGBTQI, there is a need for solidarity from the side of a feminist movement. And what is expected by sex workers from the feminists is not stigmatization, victimization or moralization, but help and support.

After the press-conference everyone was invited to taste the chocolate cakes in the shape of red umbrellas with the words written on them “Happy Birthday! 15.” and drink some soft drinks or champagne, as well as to socialize. 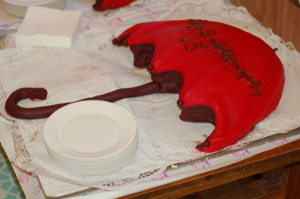 The interview with a sex worker volunteer of SZEXE

While the people were enjoying the cake, I managed to talk to one of sex workers who is also a volunteer at SZEXE.

Me: Why are you here?

Ancy: Because there were problems with earning for living. I could not get a job, and I could not sustain my child and the flat. We were literally starving. I could not find any job because I was ‘too old’. Before I was working in hospitality field as a waitress. Therefore I have chosen sex work so that I can earn some money as soon as possible.

Me: How long have you been a sex worker?

Me: Are you working in Budapest?

Ancy: Yes, I am working from a flat in Budapest, I place my adverts on the Internet, people can reach me by phone. 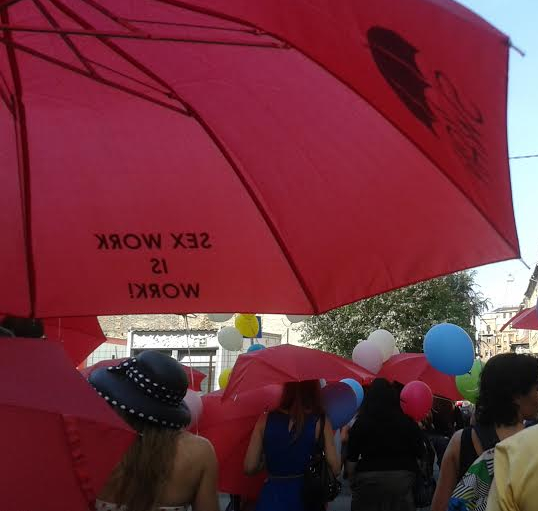 Me: And how come you joined SZEXE?

Ancy: I joined SZEXE because I faced discrimination. I was searching for a partner on a dating website, and I was banned from there as soon as they found out that I am a sex worker. This is what they stated, and this is a clear case of discrimination. I searched for SZEXE, where I received help and advice. And then I decided to become a volunteer there.

Me: What does today’s event and a public march mean to you?

Ancy: I hope that once sex work will be legalized, because we are the same people as anyone else, so I am the same worker, a mistress, as anyone working in an office. And I would also like to do it legally, because this work (sex work) was, is and will be.

Me: According to the law, sex work is legalized in Hungary. 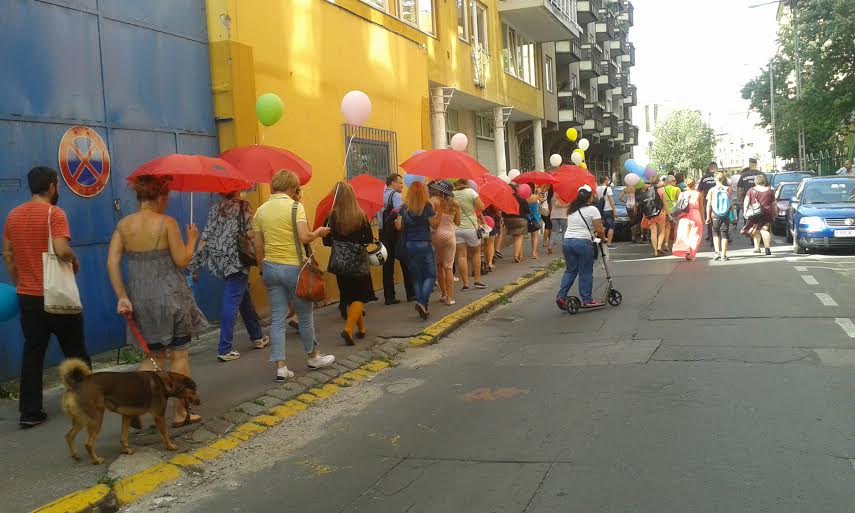 Me: So, for you it is also important that you are doing something at SZEXE that can improve the situation with sex workers in Hungary?

I thank Ancy and leave the celebration in hope that another step is made towards improvement of sex workers situation in Hungary. There are a lot of issues around sex work in Hungary, and it is very important to remind to the politicians, the media, the society about the existence of sex workers and their everyday fight for their rights. As we know, little strokes fell great oaks.