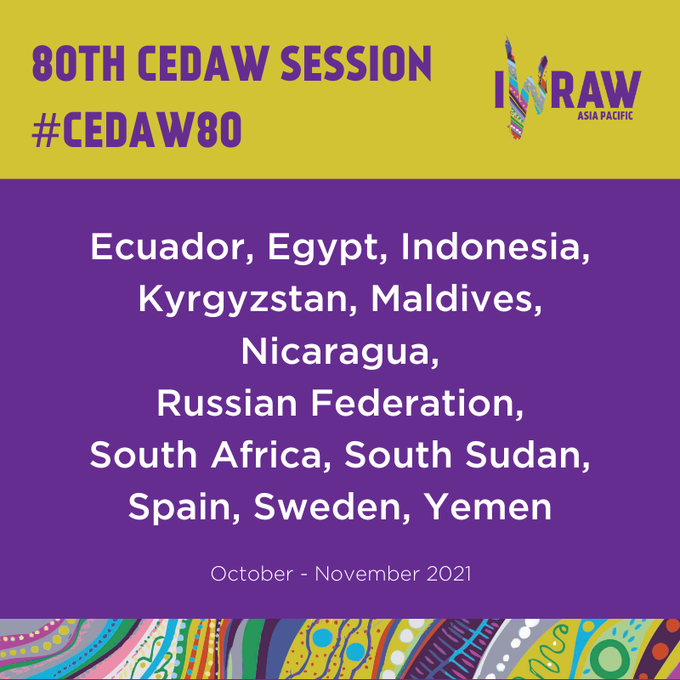 CEDAW Committee, as a result of its 80th session in October-November 2021, at which it  considered the report of Kyrgyzstan, issued recommendations for the country on November 15th.

The joint Alternative Report of the Informal Coalition CEDAW Kyrgyzstan, which describes the status of four groups of women facing intersecting forms of discrimination, also reflected on the position of sex workers. Soon after, the group of NGOs submitted a pre-session report. As a member of this Coalition, Tais Plus was supposed to give an oral presentation. Still, unfortunately, the Coalition could not deliver the entire speech due to the disconnection of the online session. When the Committee was considering the state report in dialogue with the State party, Kyrgyzstan received a question about the government to “reduce the demand for commercial sex.” Members of the Committee also asked questions about women in disadvantaged situations, but they did not mention sex workers here either.

Recommendation 36 (c) mentioned sex workers in the context of health, calling to combat corruption in the health care system and gender-based violence and discrimination by health personnel. It specifies that the country should pay special attention to the protection from violence of women who use drugs, women living with HIV, and sex workers.

The representative of Tais Plus highlights: ‘On the recommendations, we are troubled, since very few recommendations are there for sex workers, there are also those recommendations for which we had sex worker issues addressed, but the Observations do not utilize the term” sex work. ” The reducing-the-demand recommendation for commercial sex repeats for the second time: we try to avoid it by not including it in the National Action Plan to implement CEDAW Recommendations.’

The Committee mentioned police violence against sex workers solely in the section on trafficking and exploitation of prostitution, although this type of violence has far-going consequences overall for rights and health.

Still, the Committee made one general recommendation that presents a mix of reducing demand and exit programs and tackling police violence, continuing to use the term ‘women in prostitution. Thus, recommendation 24 (H) calls to discourage the demand for commercial sex and provide women wishing to quit prostitution with exit programs and alternative income opportunities. In addition, the Committee calls the Ministry of Internal Affairs to effectively implement its Order No. 946-r of December 14, 2017. This  means monitoring, prosecuting, and punishing police for violence and arbitrariness against sex workers and strengthens the role of the prosecutor’s office in this regard.

It’s important to highlight that the Committee noted women from intersecting discrimination groups to be unable to receive food assistance during the lockdown in 2020 when they lacked to documents and permanent residence, –  the situation in which many sex workers found themselves in COVID times. Overall, women with intersecting forms of discrimination are there in sections on gender-based violence, trafficking, and health. Committee also mentioned women in disadvantaged situations, women living with HIV, women who use drugs, and LBT women were mentioned separately.

The full text of the recommendations related to issues of sex workers and mentioned above is:

24.    Recalling its general recommendation No. 38 (2020) on trafficking in women and girls in the context of global migration and previous recommendations (CEDAW/C/KGZ/CO/4, para. 22), the Committee recommends that the State party:

(c)     Strengthen investigation, prosecution and adequate punishment of perpetrators of trafficking in women and girls, and ensure that convicted perpetrators serve their sentences; and continue addressing the root causes of corruption and complicity among law enforcement officials;

(d)     Ensure the early identification of victims of trafficking including with regard to disadvantaged groups of women; address online recruitment of victims; strengthen training for judges, prosecutors and law enforcement officers on victim identification and gender-sensitive and child-sensitive investigation and interrogation procedures;

(f)     Ensure systematic collection and analysis of data on trafficking, disaggregated by age, sex, nationality of victims and forms of trafficking;

(g)     Conduct awareness-raising campaigns on the risks of being trafficked and provide access to income-generating opportunities, financial support, legal assistance, hotlines and pre-departure information to migrant women and girls; and

(h)     Discourage the demand for commercial sex; provide exit programmes and alternative income-generating opportunities to women who wish to leave prostitution. Disseminate and effectively implement Order No. 946-r of December 14, 2017, including monitoring, prosecuting and punishing police violence and arbitrariness against women in prostitution and strengthening the role of the Prosecutor’s Office in this respect.

36.    The Committee recalls its general recommendation No. 24 (1999) on women and health and recommends that the State party:

(a)     Address the causes of maternal and infant mortality by ensuring access to safe abortion and post-abortion services and obstetric care, addressing the high number of early pregnancies and increasing the number of skilled birth attendants, including in rural and remote areas;

(b)     Strengthen access to adequate and affordable healthcare for women and girls by ensuring a sufficient number of healthcare facilities with adequately trained staff , including in rural and remote areas;

(c)     Combat corruption in the healthcare system and gender-based violence and discrimination by healthcare personnel, particularly against women using drugs, women with HIV/AIDS and women in prostitution;

(d)     Intensify efforts to improve access to affordable and quality healthcare for migrant women, including by raising their awareness of sexual and reproductive health and rights and the risk of transmission of HIV/AIDS and tuberculosis; and strengthen the systematic collection and analysis of disaggregated data on migrant women’s and girls’ access to healthcare;

(e)     Ensure confidential access to affordable modern contraceptive methods, family planning services and HIV testing throughout the State party; ensure access to free antiretroviral therapy to all women and girls living with HIV/AIDS, including women in prostitution, also in remote and rural areas;         (f)     Prevent and diagnose breast and gynaecological cancer, including by providing professional training to medical personnel and sensitizing women and girls, ensure affordable access for all patients to treatment, including chemotherapy and immunotherapy in public hospitals;

(g)     Extend the mandatory health insurance system to migrant, refugee and asylum-seeking women and girls and revise the Law on Medical Health Insurance (1999) accordingly; and